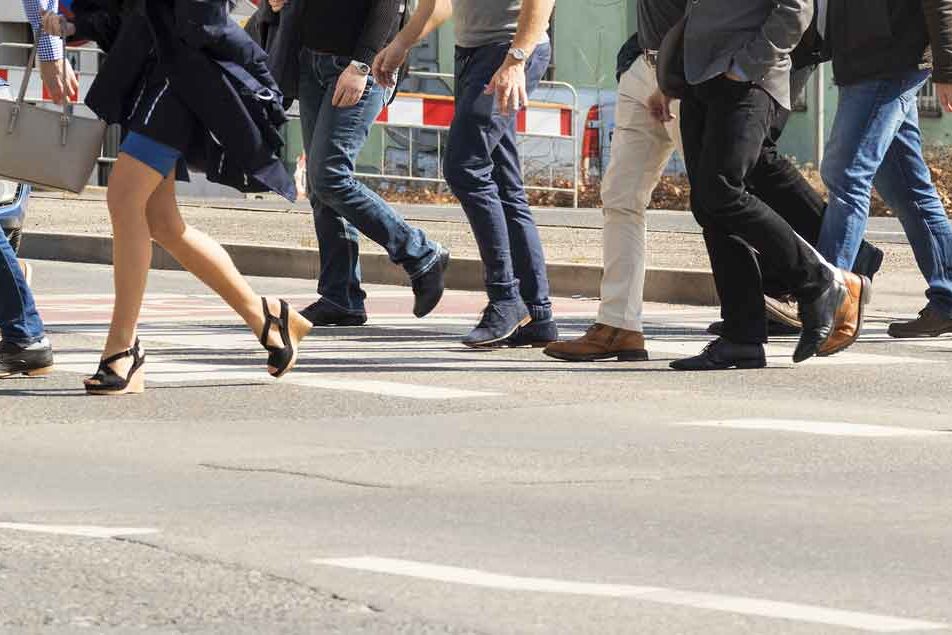 The open road—wide lanes, fast driving, cruising from point A to point B all while enjoying the AC that your vehicle has to offer.  It sounds like a wonderful American driving utopia.  Unfortunately, the open road is only wonderful if you’re behind the wheel.  In today’s ever-growing cities, roads are being made larger and faster than they ever have before.  If you’re driving to work this sounds like a great benefit, but if you are someone who would rather walk or cycle to work, these large roads can have adverse consequences for you.  When creating new roads, it is imperative that DOT’s and city engineers plan around the safety of pedestrians and vehicles alike.

Many roads today lack pedestrian routes that make cycling and walking around difficult.  It is not uncommon to see large stretches of roads in cities that do not have any crossings or intersections for miles.  These situations force pedestrians to make a choice, “Do I walk the 2 miles down the road to the nearest safe crossing… or do I take my chances and run across the street to get to the grocery store?”

Below we will explain some various ways that will benefit non-vehicle road users that can save lives, as well as make city streets more accessible for all who use them.

Bike lanes are a great way to allow cyclists to get around without interrupting pedestrians who are using sidewalks.  Cyclists typically follow the rules of the road and in many cases are treated as a vehicle.  In many cases this is not an issue but as speed limits rise, cyclists are more prone to being involved in accidents.  It is not uncommon to see more cyclists using sidewalks rather than bike lanes once speeds increase.  One way to make streets safer for cyclists as well as decrease vehicle and cyclists’ accidents and clear up space on sidewalks is to install separated bike lanes.

The world’s first crosswalk as we know it today was created in 1951 in Slough, England.  Crosswalks come in many different shapes and sizes and according to the FHWA and MUTCD they, “should be marked at all intersections that have ‘substantial conflict between vehicular and pedestrian movements.’”² Crosswalks provide drivers a visual cue that pedestrians may be active in the area.  However, crosswalks do not force drivers to slow down or actively look for pedestrians.  By raising a crosswalk to be flush with the height of a sidewalk pedestrians become more prominent in the driver’s field of vision and may reduce vehicle speeds and improve motorists yielding.³ The FHWA has stated that raised crosswalks can reduce pedestrian crashes by 45%.  A raised crosswalk is typically installed on 2 or 3-lane roads with speed limits of 30 mph or less and annual average daily traffic below 9,000.  They should generally be avoided on truck routes, emergency routes, and arterial streets.

Proper lighting of a crosswalk can be very effective in reducing vehicle and pedestrian crashes.  “Three out of four pedestrian fatalities occur at night, with ‘lack of lighting’ cited as a contributing factor.”4 By providing lighting that illuminates pedestrians while crossing and prior to entering a crosswalk allows drivers a greater chance of seeing a pedestrian in the act of crossing.

There are several types of lighting that help drivers see pedestrians while crossing.  One version of lighting that can be effective is smart nighttime lighting measures that emit lighting above crosswalks that is activated once a pedestrian pushes a button or when an automated device detects pedestrians.  In-roadway warning lights (IRWLs) are another effective form of increasing awareness by illuminating the crossing from the pavement.  Just like smart nighttime lighting, IRWLs are activated when a pedestrian is in the act of crossing.  These lights direct driver’s attention to the roadway thus being more likely to identify that a pedestrian is actively crossing.5

One of the most important factors to consider when installing effective crosswalk lighting is location.  Best practice suggests placing streetlights “along both sides of arterial streets to provide a consistent level of lighting along a roadway.”6 Single lighting directly above the crosswalk has proven to lack the adequate amount of light needed to illuminate a pedestrian for oncoming drivers.  Providing lighting that emits light downwards on both sides of a crossing can give drivers a greater chance to avoid collisions with pedestrians.

In recent years Rectangular Rapid Flashing Beacons (RRFB) and High Intensity Activated CrossWalk (HAWK) Crossings have become valuable tools to protect pedestrians at midblock crossings.  RRFBs emit irregular alternating flashing lights that warn drivers of pedestrians crossing and are installed on each end of the crosswalk, and in a median if present.  RRFB lighting consists of yellow LEDs and the irregular flashing patterns have proven to increase driver awareness of pedestrians in an intersection.7 HAWK crossings provide drivers with multiple cues that a pedestrian is in the act of crossing.  “These cues include a unique configuration of the HAWK beacon (two red lenses over a single yellow lens), high-visibility crosswalk markings (ladder-style markings as opposed to only two transverse white lines)””When Activated, the HAWK uses a red indication to inform drivers to stop.”8

RRFBs and HAWK crossings provide cities the chance to add more midblock crossings between large stretches of roads that lack signalized intersections or to provide more safety to pedestrians who have the right-of-way in marked crosswalks at uncontrolled locations.  RRFBs and HAWK crossings do not impact traffic flow while pedestrians are not present because they do not activate unless a pedestrian pushes a button (PedSafety’s Guardian APS  and 4 EVR MOAB  are commonly used at many RRFB and HAWK crossings) to actively cross.  These two forms of crossings can dramatically help make pedestrians more visible to drivers and thus save more lives.

There are several different ways that we can create safer roads for all who use them.  Even though cars are the ones on the roads there is no reason that they can not also be created with pedestrians and cyclists in mind.  If you are interested in learning more about how to protect pedestrians and cyclists, the links in this article can provide case studies and examples of how to implement these forms of safety.  If you are in need of a pedestrian push button to use at a RRFB or HAWK crossing or for easy access for cyclists in your new separated bike lane please contact PedSafety at info@pedsafety.com.